As my train sped north along the Hudson River, I was filled with tingly anticipation for what was in store for me at Pocantico Hills—three weeks in residence with eight of the most kick-ass women working at the intersection of agriculture and climate change. We had been selected as the second cohort of the Stone Barns Exchange Fellowship, which is designed to grow a network of food system leaders. The idea is that by putting us together 24/7 to learn from experts and share knowledge and resources, we’ll expand our impact across disciplines and accelerate food system change.

The first person I met was Selassie Atadika, who transitioned from work in international development and humanitarian aid to running an Accra-based nomadic dining concept and becoming a champion for what she’s dubbed “New African Cuisine.” Watching me lugging my bags, Selassie, a take-charge woman, persisted in asking me if I needed help until I gave in. She lifted the heavy load off my shoulder like it was a basket of mushrooms and carried it into the house. It was a small moment, but set the tone for the spirit of generosity and collaboration among our group of strong, passionate, and hyper-competent fellows.

Our three-story white clapboard house in Ossining, with its nine bedrooms and four-and-a-half bathrooms (!) seemed designed with our group in mind. After a welcome briefing in the grass- and tree-lined backyard by our unflappable leader, Jessica Lutz, we headed out for a tour the Stone Barns property, farm lab and teaching center.

The 85-acre spread has recently been annexed with another 300 acres, all now in service of advancing the practice of agroecology. Cattle, sheep, goats, and two graziers have been brought on to the new land for experiments in rotational grazing. The term “grazier” sounded so archaic and pastoral, and made me wonder what that life was like.

We passed vegetable fields on a seven-year rotation pattern, then entered the fully automated greenhouses bursting with basil, Swiss chard and ginger. Composting and waste management are given careful thought, as well, we later learned from grasslands manager Shane Hardy. In the forest, we saw playful pigs in charge of gobbling up one thousand pounds of garden and kitchen waste daily. We learned that holistic management of the property and the cultivation of more than 350 different crops has made it a welcoming habitat for 100 unique species of pollinators, and a growing population of birds.

To those of us who advocate for this holistic kind of land management, with its overlay of complex, interlocking systems, coming to Stone Barns is like making a pilgrimage to the promised land. One afternoon, during a rare break, a group of us walked to the back pasture and lay among the tall grasses to rest. The earth felt nurturing and healing against our backs, as though all the love that stewards of present and past generations had put into it was there to support us.

Most of the week was jam-packed with lectures, tours and a front-loaded schedule of presentations by all nine fellows. I won’t go into those too much here, but I hope to give you more of a sense of the work my amazing fellow fellows are doing in my next posts.

Farm Director Jack Algiere told us about his cool new gadget, a mass spectrometer developed by the Yale forestry department that in an instant can measure carbon sequestration levels in a core sample of soil. Since gathering data is a key part of learning how to building healthy soil, Jack is excited about the possibilities of his new machine.

Forager and landscape manager Laura Perkins and Jack both spoke of invasive species in a way that was new to me. Rather than something to be eradicated at all costs, Jack sees their presence as a messenger from the ecosystem, telling him what it is missing. Laura spoke of successive waves of invasives, from Japanese honeysuckle to bittersweet to porcelain berry and how she’s learned to let them take their turns, knowing that “the wild will take care of them by itself.”

Some of the best parts of the week were spent gathering about the big wooden table in our kitchen, eating, drinking wine and getting to know each other. Amy Grondin, a Port Townsend, Washington-based commercial fisherman and board member of the Organic Seed Alliance, flew in direct from Sitka bearing two beautiful wild Alaska king salmon, one for us, and one for the chefs a Blue Hill at Stone Barns. And she made two delicious dinners out of the fish for us! Ariel Pasternak, the Washington, D.C. founder and CEO of Pineapple Collaborative, a platform for women to explore their style, identity and values through food, we learned, is an artist of the cheese board. 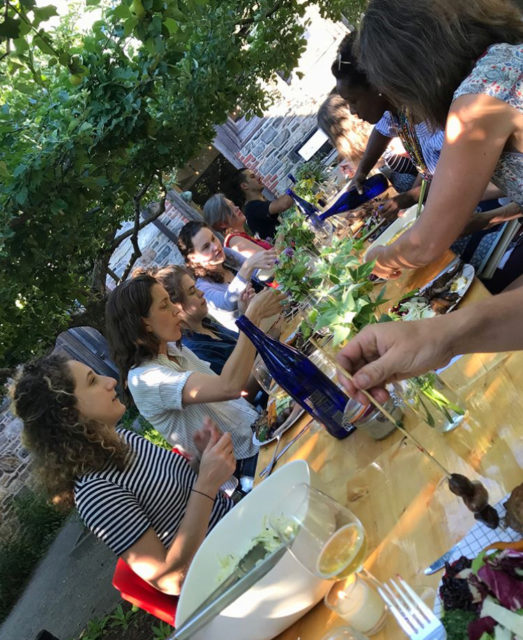 Back at Stone Barns, there were many powerful speakers to learn from. Author and activist Anna Lappé came and spoke one evening as part of the Summer Nights at Stone Barns series. In a conversation with the fellows before her lecture, Anna told us that although more attention is being paid to the perils of industrial agriculture and its effects on climate change, several areas bear watching: corporate greenwashing, where large companies use the mantle of sustainability to cover less-than-sustainable practices; land-grabbing by vested interests to capture increasingly valuable carbon sequestration offsets, and the lure of “false solutions” that may end up being more energy intensive or fail to improve the problem it purports to solve. All of these ideas will inform my reporting from now on.

Barbara Shubinski, assistant director for research and education at the Rockefeller Archive Center, gave a provocative talk on the Rockefeller family’s role in global philanthropy and the green revolution. Well-intentioned “scientific farming” techniques (e.g., lots of chemical inputs, irrigation, the hybrid dwarf wheat) did increase yields in developing countries, and in some cases prevented famine. But the green revolution also exported an industrialized system of monocropping dependent on pesticides and chemical fertilizers. The results: soil depletion, desertification, and, in extreme cases, climate change refugees whose land is no longer fit for farming.

For our group, it brought up important issues. How can we do a better job of effecting systems change that is not top down, that listens to and empowers grass-roots communities? How can we, as people of privilege, do a better job of knowing when help is needed, and what kind?

Many of our discussions centered on the question of how we can create the greatest impact. When it comes to changing consumer behavior, Ariel suggested working on converting “the low hanging fruit” of people who can afford to pay the higher prices of responsibly farmed foods but don’t, showing them why they should support regenerative agriculture.

Aria McLauchlan, co-founder of Land Core USA, an organization lobbying for soil health legislation in the 2018 Farm Bill, would like to see more press coverage on regenerative agriculture directed at investors who can fund innovators in the field. How to create “good food lobbies” will be the subject of ongoing discussions.

In a fascinating session on carbon farming, field ecologist and agroforestry specialist Connor Stedman sounded a dire alarm about climate change. As worldwide deforestation accelerates, carbon farming, he told us, is one of the most promising ways of creating climate change resilience, improving soil and water resources and boosting plant production.

On Friday, heading down river this time, I thought back on the huge amount we had experienced and learned. I felt more grounded, secure in knowing I was part of a larger network of like-minded activists, and grateful for so many new ideas, resources, and friendships. And this was only after week one!

Read Part II: What’s Better, Honey or Vinegar? and Part III: Not the End, But the Beginning.

Nancy Matsumoto is a freelance writer and editor specializing in sustainable agriculture, food, health and culture.