l write the final blog post of our Stone Barns Exchange Fellowship 2018 with a bit of disbelief that so much happened in so short a span of time. The three weeks I spent at Stone Barns were exhilarating and challenging, pushing me to go deeper in thinking about our food system, and my role in it in the face of accelerating climate change. It was also a bonding experience, both to people and place—a rare gift in a life governed by deadlines, obligations and constant travel across cities and borders.

Stone Barns opened up the different facets of its operation to us nine fellows, letting us spend time with the farmers most closely involved with its greenhouses, pastures, and fields. We got to see up close their experiments in regenerative agricultural practices, and signs of a land returning to wholeness. The bobolinks—considered an “indicator species”—that have settled on the property are just one example. And we came to appreciate the role Stone Barns plays in educating the public and encouraging people to actively work for food systems equity and change, from sponsoring its Summer Institute program for high schools students to its exciting Food Ed program (more on that later) and the related teacher training programs.

Blue Hill at Stone Barns, the for-profit counterpart to the non-profit Stone Barns, likewise welcomed us into its kitchen, bake room and dining room. We got to see the inner workings of a restaurant that shows diners how deliciousness springs directly from the land and the people who tend it, especially those working to improve the soil and increase biodiversity through selective breeding. We saw how through an inventive menu and playful service that privileges vegetables over meat, Chef Dan Barber is showing guests how they, too, can be active participants in pushing for agroecological change.

As fellows, it was hard to say goodbye to each other and to the routines we had adopted: nudging each other to assemble on time in the kitchen of our rented farmhouse every morning to make the short drive to Stone Barns; visiting our friends Alberto and Francina at the Blue Hill Café and Grain Bar, which we relied on for caffeine and baker Adam Tan and his team’s addictive whole wheat croissants, cheddar scones, and buckwheat-raspberry cakes.

Between sessions, our hangouts became the library, our de facto clubhouse at Stone Barns, and the covered patio next to the café, where we could work or meet with others. By the end of our residency, we joked, the Center felt like our own beautiful university campus, where we played agroecology grad students. The difference here was that the bad-ass, woman-dominated leadership (CEO Jill Isenbarger, Director of Programs Sara Elliott, Director of Strategy Erica Helms, Senior Programs Manager Jessica Lutz, and too many others to name), were way cooler, more invested in our progress, and better dressed than the faculty members we had in college.

The week started with a trip to Manhattan, where the themes were womanpower and the power of good food. We visited Hot Bread Kitchen, which combines a non-profit social enterprise baker training and education program for job-insecure women with a commercial bakery and food incubator space in East Harlem. Founder and CEO Jessamyn Waldman Rodriguez gave us a tour and international bread tasting at Hot Bread headquarters. 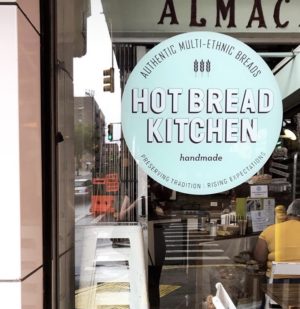 This trip was especially relevant to my fellow fellow Katy Chang, who runs a Washington, D.C. food incubator and pop up space called EatsPlace. She spotted the need for such a space after a fermented black bean hot sauce she invented was featured in Food & Wine—the magazine dubbed it “Ninja sauce”—and she didn’t have the kitchen space she needed to keep up with orders. Since opening its food accelerator building in 2014, EatsPlace has hosted everything from Filipino street food to Middle Eastern-inspired cocktails. Katy has had more lives and professions than the rest of us put together, ranging from bartender to filmmaker to lawyer to chef. So when she says she’s going to start a farm one day, we believe her, and we also believe in the prototype solar bag cooker she’s working on that could be used for disaster relief rations, to purify water, or as emergency back up.

Next we visited the Museum of the City of New York, where we toured a fascinating exhibit, “Beyond Suffrage: A Century of New York Women in Politics.” We learned about the successive waves of inclusion that women had to fight for: blacks and other minority women were segregated from the white suffragette movement; later the LBGT community waged its own battle for inclusion. The hard work and constant struggle that went on over decades was inspiring to us, a reminder that any kind of change, whether social, political, environmental or agricultural, takes hard work over many years. 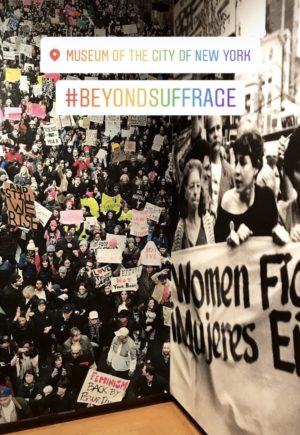 Lunch that day was at Cosme, chef Enrique Olvera and chef de cuisine Daniela Soto-Innes’s modern Mexican restaurant in the Flatiron district. The food sovereignty lesson here was the importance of preserving culinary ingredients and traditions, like the landrace corn that Enrique uses for his yellow and blue tortillas. But for us fellows, it was mostly about feasting and communing over a beautiful family style lunch of uni tostadas, an amazing endive, ayocote bean, avocado and pine nut dish, and grilled branzino and duck carnitas. And of course, the famous corn husk meringue dessert!

Tuesday was again all about women, this time at a lunch event sponsored by Stone Barns, “We Are the Future of Food,” a gathering of women innovators working for food systems change. Each fellow made a short presentation on her work, followed by roving round table discussions of questions like, “How do you find the right scale for making food systems change? How do you maintain integrity as you grow?” Kathleen Finlay, president of Glynwood led a session on needs and wants, with volunteers standing up to express a need (financial backers, a new staff member) and others standing up to offer the item in need. It was a powerful display of mutual support.

Wednesday we met with educator Lindsey Dayton, who described Stone Barns’ innovative and ambitious Food Ed. program to us. The program teaches food to high school students in a way that integrates food systems, food culture, the environment, and issues of power and equity; the goal, Lindsey told us, is to reach one in ten high school students in ten years.

In response to the fellow’s wishes for more talk about funding, our leaders added relevant sessions. Last week, Stone Barns Director of Strategy Erica Helms gave a concise and informative talk on philanthropic donation. This week fellow Ariel Pasternak brought in her friend Thomas Kamei of Morgan Stanley to talk about social ventures (he helped Lonely Whale’s #stopsucking anti-plastic straw campaign go viral). Another entrepreneurship-focused meet-up gave us access to David Barber, co-founder/owner of Blue Hill; sweetgreen co-founder and co-CEO Nicolas Jammet; Rachel Krupa, founder of The Goods Mart, an all-natural take on the 7-Eleven model, and Sir Kensington co-founder and CEO Mark Ramadan. Mark’s account of the purchase of his company by Unilever illustrated both the benefits and drawback of this path to growth.

Somewhat along these lines, food and agricultural innovation is especially of interest to another of my fellow fellows, Ariel Lauren Wilson. In addition to editing Edible Manhattan and Edible Brooklyn, Lauren, as we know her, has for the past two years been helping program Food Loves Tech, which focuses on how technology shapes and changes the way we cultivate and consume food. Lauren, who grew up on a farm in North Carolina, was able to arrange for David Barber and Jack Algiere from Stone Barns to participate in this November’s iteration of the event. She’s especially interested in highlighting how thoughtful innovations, low or high tech or somewhere in between, can help make our ag and food systems more equitable, diverse, sustainable, and delicious. Lauren also emerged as our resident personality expert, borrowing from the high-tech sorting hat method from Harry Potter (I am a cross between a Ravenclaw and Slytherin, intelligent and cunning (?!), and Lauren is indeed a Ravenclaw and a Hufflepuff—inclusive, loyal and fair).

Our final speaker of the week was Marcia DeLonge, senior scientist with the Union of Concerned Scientists. Passionate about building soil and sequestering carbon, Marcia explained that there’s tremendous potential for soil to draw down carbon. The earth’s soil now stores 1,500 billion tons of carbon, “so even a small percentage change over a large area can make a big difference,” she said. “We shouldn’t bank on it solving climate change on its own,” she added, “but it can help build resilience.”

As we wound up our last week, we worked on goal setting and planning for an October follow-up meeting of the fellows and our participation in December’s Stone Barns Young Farmers Conference. It was empowering to know that we had each others’ backs, and that we were now accountable in a real way to each other. It wasn’t goodbye, we knew, but the early days of a strong network of past and future fellows.

Read Part I and Part II of Nancy’s series here and stay tuned for more from the Exchange Fellows!