In between, we visited with more on-farm and outside experts and spent an entire day with the team at Blue Hill at Stone Barns, the farm-driven restaurant headed by Chef Dan Barber. We tasted delicious loaves made of the eponymous Barber wheat (developed through hybridization with Dr. Steve Jones of Washington State University), and some of Blue Hill baker Adam Tan’s unbelievably airy, tender and crusty whole-wheat baguettes. Onsite milling resulting in flour almost powder soft is one of Adam’s secrets. After meetings with the kitchen staff and captains, the day culminated in an unforgettable dinner at Blue Hill.

One of our most fun group activities was the “Food Waste Entrepreneurial Challenge with Adam Kaye, vice president of culinary affairs at Blue Hill. The challenge was to take the odds and ends leftovers in the Blue Hill kitchen and make a lunch out of them for our group. In about an hour, four separate groups managed to put together a delicious lunch: Katy and Lauren made a “garbacho” cold soup with vegetable trim and orange juice, and Ariel and Kathryn made a “wast (M)ed” Mediterranean-inspired salad of eggplant seed and pepper skin dip (plus yogurt, whey and feta brine) and leftover trim of lettuce, fennel and celery. Amy, Karen and Selassie made a main of vegetable scraps and meat ends called “succo-trash,” and Aria and I made a “preloved parfait,” consisting of layers of toasted cake and dried beet, currant puree, and coffee grounds-infused whipped cream. 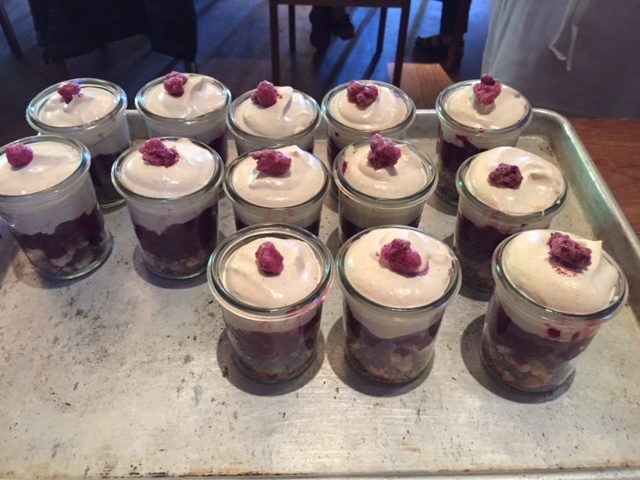 Our time outdoors with Jack, Jason and Mike was some of the most enjoyable for us. Jason led us on a squash breeding exercise, where we learned how to twist-tie squash blossoms, one male and one female. We placed a white flag next to each tied blossom so we could find them the next day. The stamen of the male flower “is a straight-up paint brush,” Jason said, demonstrating the painting of pollen on the stigma of the female flower. 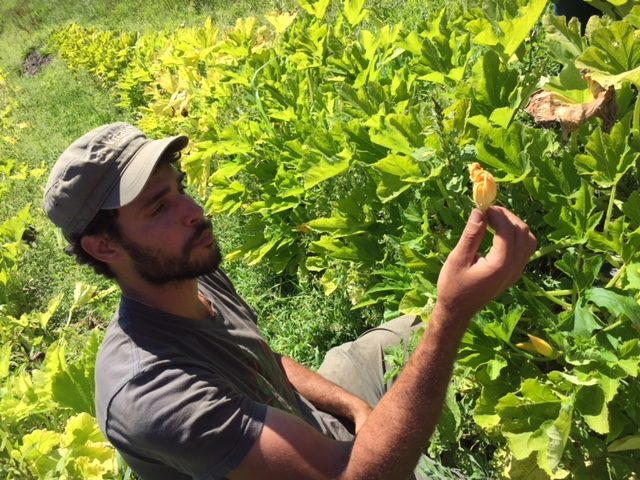 During our conversation about seed saving, Jack explained that it was one way to counter the loss of biodiversity the world’s ecosystems is experiencing. “As we lose biodiversity on earth, we’re trying to save the skill of saving seeds,” he said. The rise of monocropping and GMO crops are two contributors to the loss of biodiversity. In the beet-growing areas of the Willamette Valley in Oregon, for example, GMO crops are so common that every organic farmer has a map with a two-mile circle drawn around GMO farms, to show how far away their plantings have to be to avoid cross-pollination with those genetically modified beets.

Some themes began to emerge as week two went on. One was, “What is the best method of conveying a message, with honey or vinegar?” Filmmakers Anna Chai and Nari Kye from Zero Point Zero Production Inc. came to speak about their film Wasted! The Story of Food Waste. To prepare for the project, they watched one documentary after another with doom-and-gloom messages on the topics of the environment and food waste. Their tack was the opposite. In order to “activate and empower” their audience, they felt it was important to keep the mood positive and end with a call to action. Educating children, they believe, who are some of the most enthusiastic anti-waste converts among their viewers, is the key to making long-term change.

In the little yellow barn where ducks are processed weekly, Stone Barns farmer Sam Schmidt told me that Livestock Ranger Phil Haynes had wanted to sell duck meat at the Stone Barns store, Pekins with heads on, as they are sold in Chinese markets in the U.S. and in markets around the world. This, Phil and Sam believed, would underscore the fact that the ducks were living creatures raised on the farm. “This did not go over well,” said Sam. Many people did not have the tools or the knowledge to manage this new process, so now ducks are sold with heads off.

In our own fellows’ discussions, we wrestled with the question, “What are the most effective ways to communicate our messages?” and the related question, “Are people ready for these ideas on how to drive our food system forward?” When Exchange Fellow Karen Leibowitz and her husband, chef Anthony Myint, founded their San Francisco restaurant The Perennial as a sort of living lab devoted to reversing climate change through food, their website featured the heading “OPTIMISM. ” The Perennial champions regenerative ingredients as part of its commitment to carbon neutrality–or even drawing down greenhouse gases through food production.

The Perennial established a relationship with The Land Institute, which is working to create an alternative to today’s destructive agricultural practices. As part of its mission, the Kansas-based institute has developed the perennial wheatgrass Kernza, and The Perennial became one of the first restaurants in the country to bake Kernza bread, which has become a beloved part of the menu. Karen has also become an accomplished baker of the loaf.

Karen and her husband also established a non-profit arm, The Perennial Farming Initiative, which has created a Healthy Soil Guide that is aimed at consumers to help them identify farms, ranches, and restaurants that are committed to carbon farming and healthy soils– kind of like the Monterey Bay Aquarium guide, but for land food.

Another of my fellow fellows, Kathryn Quanbeck, is focused on getting sustainable meat to market, and is a whiz on supply chain issues. She’s started out as a livestock economist for the USDA, becoming an expert on value chains, from the aggregation to marketing of grassfed and sustainable meats. Kathryn will soon be starting a new job in marketing with Carman Ranch in Oregon. Her goal is to help grow regional grass-fed brands, like Carman Ranch, into significant players in the marketplace.

Here I’ve run out of space, but hope that in next week’s post I can tell you more about our time on the land with Stone Barns experts, and describe our final week at Stone Barns.

Read Part I: Learning to Listen to the Ecosystem and Part III: Not the End, But the Beginning