The first class of Stone Barns Exchange Fellows gathered for a three-week residency in July of 2017 as they honed their knowledge and skills, connected with experts and each other and evolved their ideas through hands-on activities, conversation, and project design, ultimately working to support the development of a healthy and sustainable food system.

Four of the 2017 Exchange Fellows will be leading a panel discussion at this year’s Young Farmer’s Conference. It will be streamed live on Facebook on December 7 at 12:45pm ET.

Learn more about the 2017 Exchange Fellows:

SHANE BERNARDO Detroit, Mich.
Shane Bernardo grew up working in his family’s grocery store on the west side of Detroit. For more than 13 years, Shane’s family helped cultivate a nourishing environment for the community’s Southeast Asian, West African and Afro-Caribbean ethnic groups by providing a space for culturally relevant foods, recipes, stories and traditions to be shared. As a result, Shane also developed a heightened awareness of the social, economic and political conditions his family had in common with other families within a largely stratified community. As a lifelong resident of Detroit, Shane has been active in grassroots food justice efforts, most recently as the outreach coordinator and farm stand manager at Earthworks Urban Farm and as a facilitator for Uprooting Racism Planting Justice. Shane has also been a fellow with the Detroit Equity Action Lab and a founding member of Swimming in the Detroit River, an environmental justice storytelling collective.

TAYLOR BRORBY Ames, Iowa
Taylor Brorby is an award-winning essayist and a poet. A fellow at the Black Earth Institute, Taylor’s work has been featured in Orion Magazine, High Country News, Earth Island Journal and The Huffington Post, among others. He has held residencies at Blue Mountain Center, Mesa Refuge and the Collegeville Institute. Taylor is the author of Crude: Poems and Coming Alive: Action and Civil Disobedience; coeditor of Fracture: Essays, Poems, and Stories on Fracking in America; and is currently writing a memoir for Milkweed Editions. To support his work, Taylor has earned grants and fellowships from the North Dakota Humanities Council, Iowa State University, St. Olaf College and the National Book Critics Circle. He travels around the country to speak about hydraulic fracking and is reviews editor at Orion Magazine.

YANA GILBUENA San Francisco, Calif.
Yana Gilbuena, a Filipino-born, critically acclaimed global nomadic chef, started Salo Series to share with the world the vibrant food culture of the Philippines. The Salo Series hosts Filipino Kamayan dinners, in which food is served on communal tables decked with banana leaves, and guests are asked to eat with their hands. In her American tour, Yana hosted pop-up dinners in 50 states in 50 weeks, as well as across Canada, Mexico and Colombia. She has also been featured in major publications such as The New York Times and National Geographic. This global culinary nomad aims to further her mission and aims to host a Salo on every continent.

DAVON GOODWIN Raeford, N.C.
Davon Goodwin grew up in Pittsburgh, Pa. He holds a bachelor’s degree from the University of North Carolina at Pembroke, where he studied biology with a concentration in botany. While in college, Davon enlisted in the Army Reserve and served in Iraq and Afghanistan, where he earned a Purple Heart after he was wounded by an improvised explosive device (IED). Since 2012, Davon has been working with GrowingChange, a nonprofit organization that is transforming former North Carolina prisons into therapeutic farms and community centers where youth and veterans serve in leadership roles. Currently, Davon owns and operates OTL Farms, where he grows muscadine grapes and raises heritage livestock.

ALLISON KORN (FACILITATOR) Los Angeles, Calif.
Allison Korn is the clinical director for the Resnick Program for Food Law and Policy at UCLA Law School. She founded and directs the program’s Food Law and Policy Clinic, where students develop and implement policy interventions to address challenges affecting our food system. Allison’s teaching and scholarship focus on law, policy and practices that affect vulnerable individuals’ and communities’ access to justice, as well as interdisciplinary perspectives on policy advocacy pedagogy. Prior to joining UCLA Law School, Allison was a clinical teaching fellow at the University of Baltimore School of Law. At the University of Mississippi School of Law, Allison created and taught a practicum course addressing systemic poverty, racism and inequality in the region. In this role, Allison co-designed a project to identify and support the legal needs of small farmers and growers in the Mississippi Delta. As a practitioner, Allison was a family defense attorney at the Bronx Defenders in New York. She also brought public health strategies and grassroots organizing to her role as a South-based staff attorney with National Advocates for Pregnant Women.

HANNAH KOSKI Dallas, Texas
Hannah Koski began her career in food as a producer on a 120-acre organic vegetable farm and later went on to manage a CSA operation with 100+ members. Since obtaining a master’s degree in horticulture at Cornell University, and authoring the Cornell Small Farms Program’s “Guide to Urban Farming in New York State,” she has dedicated her career to urban food production and access. At Paul Quinn College, in Dallas, Hannah worked as director of the nationally recognized football field-turned-farm, where she designed and implemented innovative programming that challenged students and the public to tackle food insecurity through social entrepreneurship. In collaboration with leading organizations such as GROW North Texas, she provided consulting and educational services to promote urban farming and community gardening. Currently, Hannah works as national manager of food systems research and development at Blue Apron, where she helps ensure the positive economic and environmental impacts of Blue Apron’s sourcing practices.

LEE MILLER New York, N.Y.
Lee Miller’s experiences as an undergraduate on the Duke Campus Farm inspired him to embark on a career in food law, as he sought to maximize his impact on food system with a focus on policy. After obtaining a Master of Environmental Management (MEM) degree from Duke’s Nicholas School of the Environment, Lee earned a Juris Doctor (JD) degree from Yale Law School, where he co-founded the Yale Food Law Society. Currently, Lee works as a Clinical Fellow at Harvard Law School’s Food Law and Policy Clinic (FLPC). At FLPC, Lee coordinates the Farm Bill Law Enterprise (FABLE), a group that unites students from seven leading law schools to learn and conduct coordinated research on the farm bill.

MARGIANA PETERSEN-ROCKNEY Oakland, Calif.
Margiana Petersen-Rockney grew up on a goat dairy farm in Massachusetts. While still in college, Margiana ran a five-acre diversified vegetable and livestock CSA and founded the Young Farmer Network, a community group for new farmers to share management practices and build social capital. After four years farming full time, she scaled back to one acre of garlic production and relocated to Boston. At the New Entry Sustainable Farming Project and the Boston Farming Institute, Margiana worked with low-income immigrant and refugee farmers on issues of land access and farm planning. She also directed the Food Literacy Project at Harvard, a fellowship program for students to learn about and engage with the food system. Currently, as a Ph.D. student in UC Berkeley’s environmental science, policy and management program, Margiana studies issues at the intersection of climate change and diversified farming systems that affect limited-resource farmers.

MARIO EDUARDO RIVERA Minneapolis, Minn.
Mario Eduardo Rivera is originally from Zacatecas, Mexico, and has lived in the United States for 24 years. Eduardo grew up farming with his grandfather and felt disconnected from the land after moving to the United States. It wasn’t until he had his daughter, now six years old, that he was able to reconnect with the land and his childhood agricultural experiences. Eduardo graduated from high school in Arizona, where he also attended community college. He has held a variety of positions in education, cleanroom medical production, restaurants and construction. After relocating to Minnesota, Eduardo worked at Mississippi Market and Seward Community Co-op, and connected with Latin@ community organizing and outreach nonprofits. Currently, Eduardo is the owner and farmer of  Sin Fronteras Farm and Food, where he grows organic and hard-to-find vegetable varieties. Sin Fronteras Farm and Food’s CSA provides Latin@ families with boxes of culturally appropriate vegetables for 18 weeks each summer. In the future, Eduardo would like to create an incubator program for young farmers of color.

SHAKIRAH SIMLEY San Francisco, Calif.
Shakirah Simley was raised in Harlem, N.Y., where her limited access to fresh, healthy and affordable food was always a challenge. As a young black woman hungry for change, she decided to dedicate her professional career and civic duties to change the future of food by uplifting vulnerable communities and youth. She is an activist, food policy advocate and good food entrepreneur. Shakirah earned her undergraduate degree in cultural anthropology and urban studies from the University of Pennsylvania, and a master’s degree in food culture and communications from the University of Gastronomic Sciences in Pollenzo, Italy. Shakirah has worked as the community programs manager and canner-in-residence at Bi-Rite in San Francisco, and as an advisor to such organizations as the Prevention Institute, Communities Creating Healthier Environments, Funders’ Collaborative for Youth Organizing and Just Food. Shakirah also serves on the following nonprofit boards that focus on food and farming in the Bay Area: Center for Urban Education about Sustainable Agriculture, SPUR, Community Grows and the Northern California Community Loan Fund Food Advisory Committee. 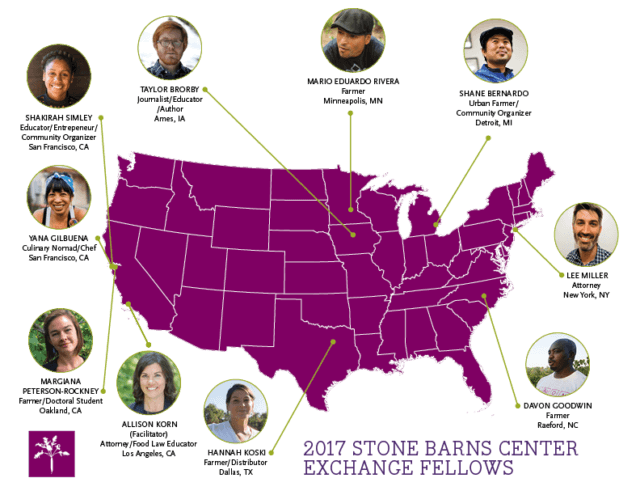